Mass spectrometry (MS)-based analysis using enzymatic digestion is widely used for protein sequencing and characterization. The large number of peptides generated from proteolysis, however, suppresses the signal of peptides with low ionization efficiency, thus precluding their observation and analysis. This study describes a technique for improved analysis of peptic peptides by adding the synthetic receptor cucurbit[7]uril (CB[7]), which binds selectively to peptides with N-terminal aromatic residues. Capturing the N-terminal phenylalanine (Phe) of peptides using CB[7] enhances the peptide abundances both in electrospray ionization MS and in matrix-assisted laser desorption ionization MS. Moreover, collision-induced dissociation (CID) of the CB[7]·peptide complex ions generates b- and y-type fragment ions with higher sequence coverage than those generated with uncomplexed peptides. The signal enhancement mediated by CB[7] is attributed to an increase in the peptide proton affinities upon CB[7] complexation. The mechanistic details of the fragmentation process are discussed on the basis of the structures of the complex ions obtained from ion mobility (IM) measurements and molecular modeling. This study demonstrates a novel and powerful approach to the enhancement of protein and peptide analysis using a synthetic receptor, without the need for new instrumentation, chemical modifications, or specialized sample preparation. The simplicity and potential generality of this technique should provide a valuable asset in the toolbox of routine protein and peptide analysis. 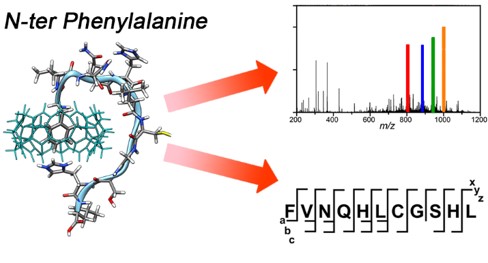