Reported here is a new theranostic agent, 1, which consists of a Gd3+-texaphyrin core conjugated to a doxorubicin prodrug via a disulfide bond. Conjugate 1 was designed to undergo cleavage in the presence of glutathione (GSH), a species typically upregulated in cancer cells. As prepared, conjugate 1 displays no appreciable fluorescence. However, when exposed to excess GSH an increase in the fluorescence intensity at 592 nm is observed that is ascribed to release of free doxorubicin. To improve the solubility and enhance the tumor targeting of 1, it was loaded into folate-receptor-targeted liposomes to produce FL-1 (for folate liposome loaded with 1). As inferred from both fluorescence turn on studies and independent HPLC analyses, FL-1 was found to undergo selective uptake and cleavage to release free Dox in the KB and CT26 cell lines, which express folate receptors on the cell surface, relative to the HepG2 and NIH3T3 cell lines, which show low expression of those receptors. FL-1 was found to produce a greater antiproliferative effect in the case of the KB and CT26 cell lines as compared to that in the HepG2 and NIH3T3 cell lines. FL-1 was also found to provide enhanced magnetic resonance imaging in vivo under conditions of T1 contrast in the early stage of metastatic cancer progression. Finally, time-dependent tumor regrowth studies involving both subcutaneous and metastatic liver cancer mouse models revealed that FL-1 is capable of reducing the tumor burden in vivo. 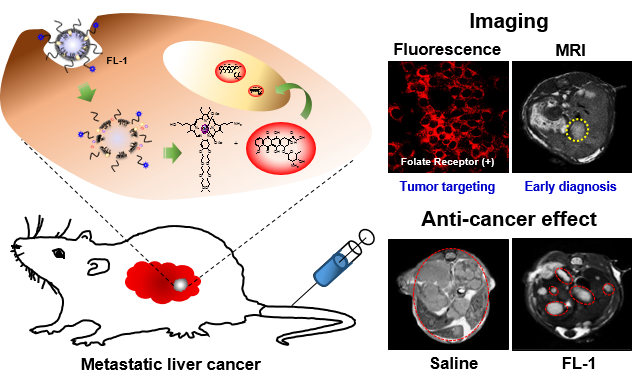