+ - Up Down Comment Print
Abstract
A series of heptamethine cyanine (1−3) derivatives bearing a carbamate ethyl disulfide group and gemcitabine, an anticancer drug, have been newly synthesized. Their disulfide bonds are readily cleaved by various thiols including glutathione, to result in a subsequent decomposition of the carbamate into amine followed by release of the active gemcitabine, which can be monitored by the fluorescence changes. In the biological experiment, prodrug 1 is preferentially up-taken by folate-positive KB cells over folatenegative A549 cells via receptor-mediated endocytosis to release gemcitabine causing cell death and to emit fluorescence in endoplasmic reticulum. Moreover, it is selectively accumulated in the KB cells which were treated to mice by dorsal subcutaneous injection. This drug delivery system is a new theranostic agent, wherein both therapeutic effect and drug uptake can be easily monitored at the subcellular level, by in vivo and in vitro ufluorescence imaging. 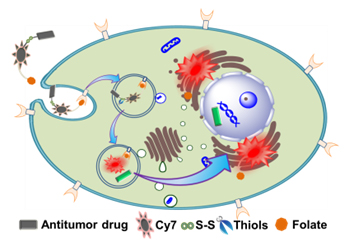 A Self-Calibrating Bipartite Viscosity Sensor for Mitochondria 2014.08.13by 〈

An Activatable Theranostic for Targeted Cancer Therapy and Im... Next »

An Activatable Theranostic for Targeted Cancer Therapy and Im... 2014.08.13by 〉