We introduce UnaG as a green-to-dark photoswitching fluorescent protein capable of high-quality super-resolution imaging with photon numbers equivalent to the brightest photoswitchable red protein. UnaG only fluoresces upon binding of a fluorogenic metabolite, bilirubin, enabling UV-free reversible photoswitching with easily controllable kinetics and low background under Epi illumination. The on- and off-switching rates are controlled by the concentration of the ligand and the excitation light intensity, respectively, where the dissolved oxygen also promotes the off-switching. The photo-oxidation reaction mechanism of bilirubin in UnaG suggests that the lack of ligand-protein covalent bond allows the oxidized ligand to detach from the protein, emptying the binding cavity for rebinding to a fresh ligand molecule. We demonstrate super-resolution single-molecule localization imaging of various subcellular structures genetically encoded with UnaG, which enables facile labeling and simultaneous multicolor imaging of live cells. UnaG has the promise of becoming a default protein for high-performance super-resolution imaging. 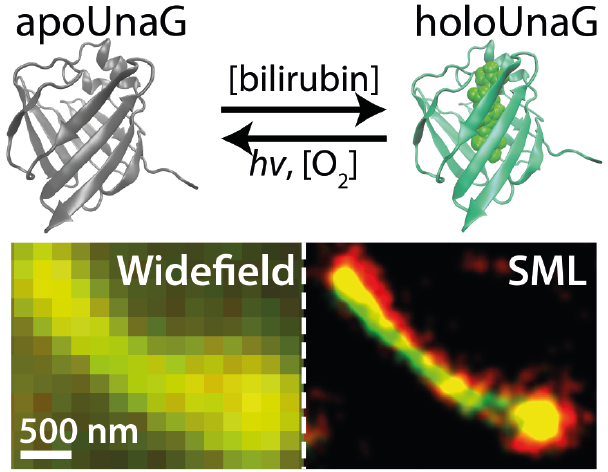 Power Factor of One Molecule Thick Films and Length Dependence Next »

Power Factor of One Molecule Thick Films and Length Dependence 2019.12.06by 〉
Up Down Print
?