The elucidation of the cause of Alzheimer’s disease remains one of the greatest questions in neurodegenerative research. The lack of highly reliable low-cost sensors to study the structural changes in key proteins during the progres-sion of the disease is a contributing factor to this lack of insight. In the current work, we describe the rational design and synthesis of two fluorescent BODIPY based probes, named Tau 1 and Tau 2. The probes were evaluated on the molecular surface formed by a fibril of the PHF6 (306VQIVYK311) tau fragment using molecular docking studies to provide a potential molecular model to rationalize the selectivity of the new probes as compared to a homologous Aβ selective probe. The probes were synthesized in a few steps from commercially available starting products and could thus prove to be highly cost effective. We demonstrated the excellent photophysical properties of the dyes, such as a large Stokes’ shift and emission in the near infrared (NIR) window of the electromagnetic spectrum. The probes demonstrated a high selectivity for self-assembled microtubule associated protein tau (MAPT, Tau protein), both in solution and cell-based experiments. Moreover, the administration to an acute murine model of tauopathy clearly revealed the staining of self-assembled hyperphosphorylated tau protein in pathologically relevant hippocampal brain regions. Tau 1 demonstrated efficient BBB penetrability, and demonstrated a clear selectivity for tau tangles over Aβ plaques, as well as the capacity for in vivo imaging in a transgenic mouse model. The current work could open up avenues for the cost-effective monitoring of the tau protein aggregation state in animal models as well as tissue staining. Furthermore, these fluorophores could serve as the basis for the development of clinically relevant sensors, for example based on PET imaging. 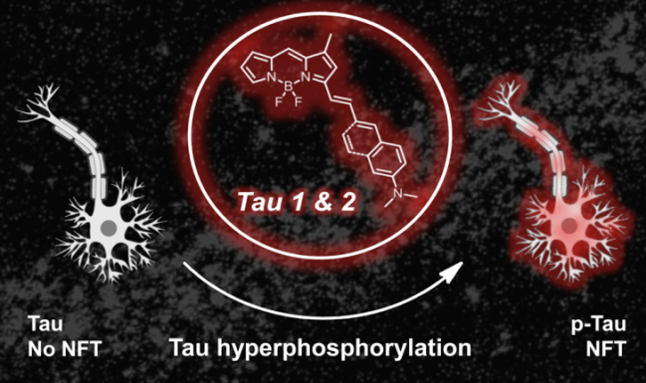