CdxHg1-xSe alloy nanocrystals are obtained from CdSe semiconductor nanocrystals via cation exchange. By varying the composition during the exchange process, the CdxHg1-xSe alloy nanocrystals offer a widely tunable electronic transition from visible to NIR and even to mid-IR range. The visible bandgap transition of the CdSe colloidal quantum dot gradually redshifts to the near-IR with the addition of the Hg precursor, and then the steady-state intraband (or inter-sub-band) transition of the CdxHg1-xSe alloy nanocrystals appears. Finally, as the electron density is increased by successive addition of metal precursor, localized surface plasmon resonances (LSPRs) appear as a major electronic transition in the mid-IR regime. The shift of the major electronic transition from the bandgap to LSPRs infers that the exciton spatially moves to the surface from the inside of the nanocrystal through the cation change and further crystal growth. The corresponding variance of the nanocrystals’ structural, compositional, optical, electrical, and magnetic properties were carefully monitored by using X-ray diffraction (XRD), X-ray photoelectron spectroscopy(XPS), electron-dispersive x-ray (EDS) spectroscopy, time-resolved photoluminescence, photocurrent measurement, and electron paramagnetic resonance (EPR) spectroscopy, respectively. While a shift in only the bandgap has been observed in conventional quantum dots when cat-ion-exchanged, the major oscillating transition transfers from the bandgap to the higher quantum states in CdxHg1-xSe alloy nanocrystal formed by the cation-exchange in this report. The compositional change expanding the optical range of nanocrystals from visible to mid-IR regime will provide a useful means of optimally tuning the electronic transition of nano-crystal-based applications along with improved optical selectivity demonstrated by a single intraband or LSPR peak. 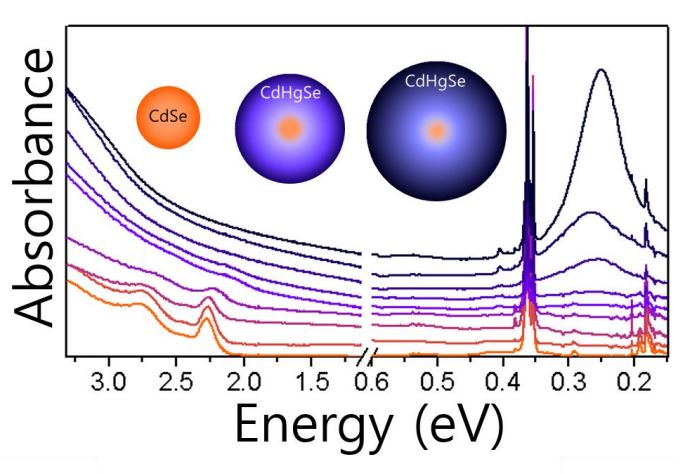