Toward a Chemical Marker for Inflammatory Disease: A Fluorescent Probe for Membrane-Localized

Thioredoxin (Trx) is a redox-active protein that plays a key role in mitigating the effects of oxidative stress. The secretion of Trx on the plasma membrane has been suggested as a distinctive feature of inflammation. However, selective monitoring of membrane-associated Trx activity has proved challenging because of the ubiquity of Trx action in cells. Here, we report a Trx-specific probe that allows visualization of Trx activity associated with the membranes via fluorescence microscopy. The ability of this probe to act as a possible screening tool for agents that modulate Trx secretion was demonstrated in HeLa cells under oxidative stress conditions and in a cellular hepatosteatosis model. Control experiments serve to confirm that the response seen for the present probe is due to Trx and that it is selective over various potentially competing metabolites, including thiolcontaining small molecules and test proteins. 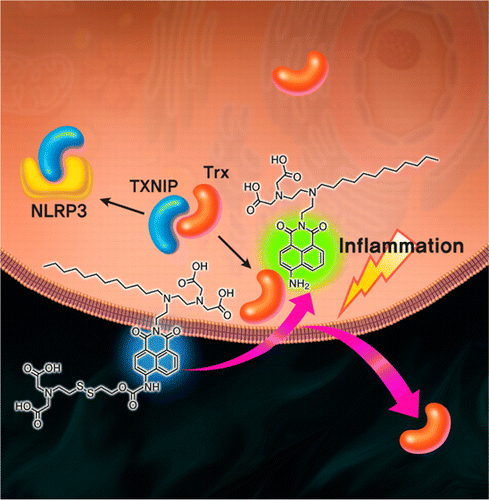 « Prev An Activatable Theranostic for Targeted Cancer Therapy and Im...

An Activatable Theranostic for Targeted Cancer Therapy and Im... 2014.08.13by 〈