Interfacial chemistry at organic-inorganic contact critically determines function of a wide range of molecular and organic electronic devices and other systems. The chemistry is, however, difficult to understand due to the lack of easily accessible in-operando spectroscopic techniques that permit access to interfacial structure on a molecular scale. Herein we compare two analogous junctions formed with identical organic thin film and different liquid top-contacts (water droplet vs. eutectic gallium indium alloy) and elucidate the puzzling interfacial characteristics. Specifically, we fine-tune the surface topography of the organic surface using mixed self-assembled monolayers (SAMs): single component SAM composed of rectifier (2,2’-bipyridyl-terminated n-undecanethiolate; denoted as SC11BIPY) is systematically diluted with non-rectifying n-alkanethiolates of different lengths (denoted as SCn where n=8, 10, 12, 14, 16, 18). Characterization of the resulting mixed SAMs in wettability and tunneling currents with the two separate liquid top-contacts allow us to investigate the role of phase segregation and gauche defect in the SAM//liquid interfaces. The results reported here show the difference in length between SC11BIPY and SCn is translated into nanoscopic pits and gauche-conformer defects on the surface, and the difference in contact force—hydrostatic vs. user pressures—and hence conformity of contact accounts for the difference in wettability and rectification behaviors. Our work provides an insight into the role of molecule-electrode interfacial defects in performance of molecular-scale electronic devices. 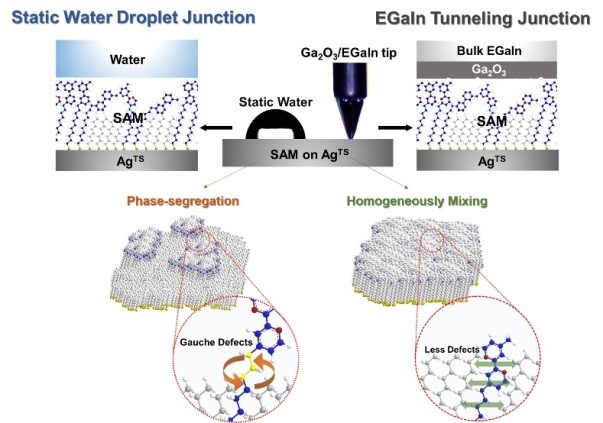